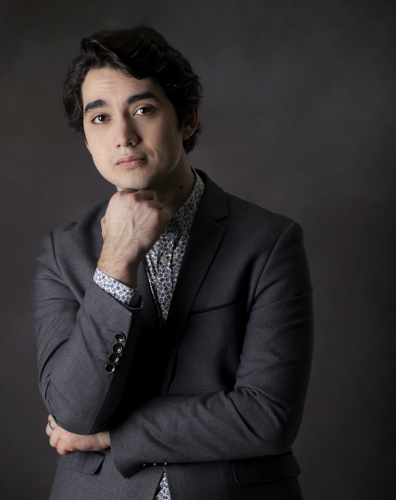 Born in Russia, he began his musical and theatrical training in Mednogorsk at the singing class of Tatiana Mayorova and then honed his craft at the University of Musik Franz Liszt Weimar and the University of Music Hans Eisler Berlin under the tutelege of Dr. Prof. Michail Lanskoi.
From 2015 to 2017, he was a member of the Academy of the Opéra National de Paris and starred in the behind-the-scenes look at the Paris Opera Documentary film by Jean-Stéphane Bron ''L'Opéra''. He performed in numerous concerts in the Amphithéâtre concert hall of the Bastille Opera. He sang in the world premiere of Joanna Lee’s Vol Retour and performed the role of Pluton (Monteverdi’s L’Orfeo). He has sung Spencer Coyle (Owen Wingrave), Hymas and Tirtée (Les Fêtes d’Hébé) in Paris and in London, Erster Handwerksbursch (Wozzeck), Silvano (Un Ballo in Maschera), Mitioukha (Boris Godunov) on the main stage of Bastille Opera.
In 2016, he won the First Prize at the International Singing Competition Bordeaux Médoc, the Cercle Carpeaux Lyric Prize, the AROP Prize (Opéra national de Paris), the Siemens Opera Contest First Prize. In 2017, he won the International Maria Callas Grand Prix in Greece.
In 2018, in Duo with the pianist Elitsa Desseva, he was awarded the First Prize at the International Chamber Music Competition “Franz Schubert and Modern Music” in Graz, the First Prize at the Hugo Wolf Academy International Art Song Competition in Stuttgart, the Second Prize and Public Prize at the International Schubert LiedDuo Competition in Dortmund and in 2019 the Third Prize and the Yamaha Audience Prize at the "International Chamber Music Competition" in Lyon and First Prize at the "Wigmore Hall/Independant Opera Song Competition" in London.
Operatic highlights of his firsts professional seasons include the world premiere of the chamber opera En Silence (by Alexandre Desplat) in Luxembourg and Paris- Bouffes du Nord, Orlik in Tchaikovsky’s Mazeppa at the Ópera de Oviedo (Spain), Moser in I Masnadieri at the Ópera Monte Carlo, Pietro in Simon Boccanegra at the Paris Opéra Bastille, Masetto in Don Giovanni at Paris Opéra Garnier and Opernhaus Düsseldorf, Figaro in Le Nozze di Figaro Opéra national de Lorraine à Nancy.
Philanthropy is a topic close to Mikhails heart. Since 2009 he gives charity concerts for children with mental disorders in Russia and takes part in several fundraising events organised by the "Yehudi Menuhin Live Musik Now e.V.'' in Germany. In a cooperation with the autonomous non-profit organisation ''Touch'' in Orenburg he supports several boarding-schools for mentally handicapped children.

He wins the Arop Lyrical Awards

Prize-winner in the Schloss Rheinsberg Chamber Opera Competition in Germany.

First prize in the Uralmärchen of Tcheliabinsk Competition in Russia